You Don’t Have to be a Volunteer to Stay Involved

UCLA alumna, Amy Croushore, tells us her post-grad ADPi story. She explains how alumnae can stay involved and feel connected without having a volunteer position – imagine that! 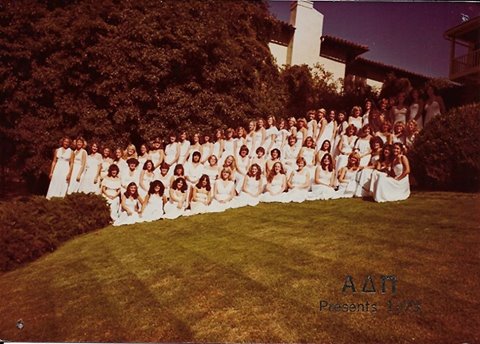 There were 69 women in my Alpha Class, and during my four years at UCLA, Alpha Chi was the largest chapter in the nation with 200 members.

I lived with 25 of them in the Alpha dorm that year. (Yes, it was one big room! And, yes, there are stories.)

On Monday nights we all stuffed into the Chapter Room, and, each day, two-dozen girls balanced lunch plates and squished into the TV room that was only big enough for two pieces of furniture. The first lucky seven shimmied onto the two-cushion sofa. The next four snuggled on the side chair. The rest perched on the high frame, sat two deep on the floor, 3 feet from the screen and straddled the side arms to watch Luke and Laura’s love story unfold in Port Charles.

I loved every no-personal-space minute of it!

I chose to be an active alumna. Why wouldn’t I? I’m the First. Finest. Forever.

flowers at weddings and lovingly sang our special songs. Tight groups of friends made the effort to get together once-a-month, sometimes taking two or three freeways to get there.

I always looked forward to the Adelphean, excited that I might read about one of my friends.  But, that was the extent of my involvement as a member. I really felt that advisory roles or large group meetings with ADPis of all ages from all around weren’t for me. I’m just not wired that way. My 200-member house was enough.

About five years ago, an upbeat, energetic collegian became the Alumnae Relations Chair for our Chapter. She worked hard to engage the AX alumnae in chapter events. Enlivened, I decided to drive the 35 miles to pour water during a Recruitment party. To me, that was a fine contribution. Just my speed.

Two girls from the Alpha Class after mine were there as well, and it was a terrific surprise to see them. It was like we lived there again, well, without all of the modern updates. (Our TV room is now a small side office with a desk and a credenza.) We pledged to come back the following month for the Alumnae Tea and bring more friends.

A dozen of us, proudly displaying our pins and lavalieres, reminisced that afternoon. The young girls had decorated the tables with old pictures and news posts. It was so fun to laugh at ourselves and share a hug over a treasured memory.

Driving home, I realized that I wanted to catch up with even more of my old friends, and I knew just the way to do it.

I created a Facebook group and closed it to only those who are my contemporaries, since we have shared experiences together. (Did I mention that I shy away from large groups of people I don’t know?) So, the 79-84 Alpha Chi group went online. Through Facebook, 145 sisters from all over reconnected. We only post pictures of Pis together from then and now, and I do my part by posting information from the international organization or our chapter. 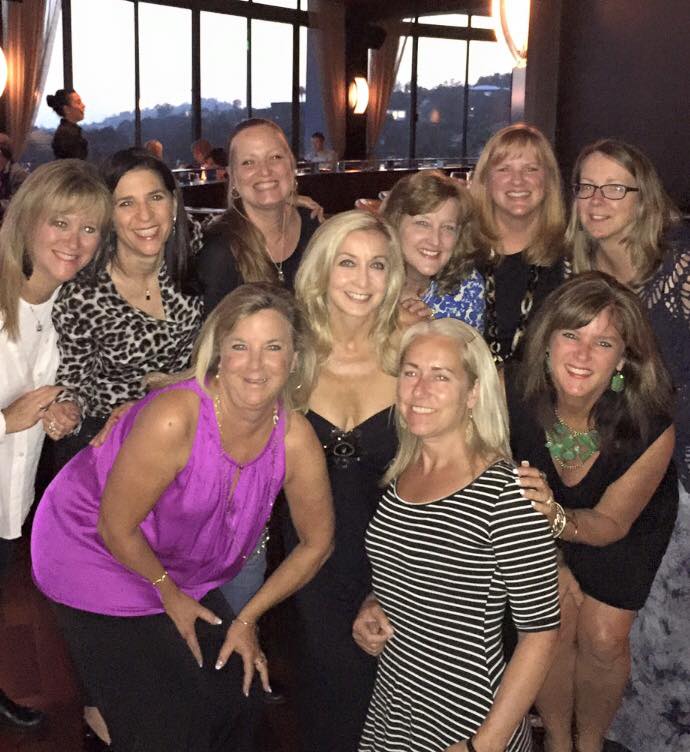 Out of this group, ladies who weren’t even close in our big house get lunch weekly. Regulars dress up and sway as a sister sings jazz in swanky clubs. Others travel to root for daughters as they compete for their colleges, or for Team USA, or even at Wimbledon. Some get tickets to see a sister in a major stage production and some send flowers. We tailgate. We network. We post on each other’s personal pages. We realize that we live two blocks away from each other. We pray for our sick parents and spouses and children. We memorialize the sisters we have lost.  We live for each other.

In just a couple of weeks 15 members of the Alpha Class of ‘77 are having a dinner to celebrate their 40th year as Pis. That wouldn’t have been possible without our special group. 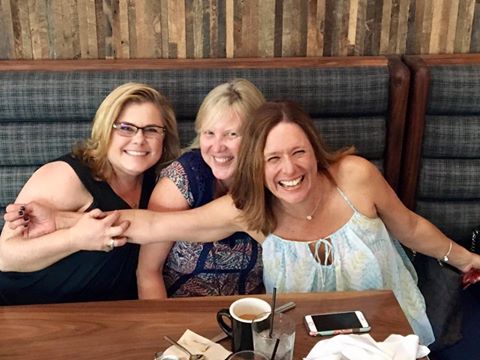 So, like those of you who aren’t able to be as involved with ADPi as two of Alpha Chi’s award-winning alumnae are, you can still keep your bond to the sisterhood strong. Whether you attend a planned dinner or grab your little sister and go to Founders Day, it’s so rewarding to see ADPis and be ADPis together again.

My sisters still mean the world to me; although I’m not really down to sit skin-to-skin in a hot, humid room again. Unless, of course, it’s at a spa… with a towel.  Hmm… there’s an idea!