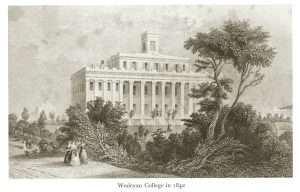 Eugenia Tucker was just sixteen years old when she left her family home in Laurens County, Georgia, to enter Wesleyan College. Before the end of her first year she would establish the first sorority in the world. Later, she would reflect on her young reasons . . .  “This was a new world . . . she finds that many of her classmates think more of mischievous enjoyment than their lessons. And so, by and by, a sober thought enters her brain—could she influence her friends to join her in forming an association for improvement.” – Eugenia Tucker Fitzgerald on her inspiration for the founding of the Adelphean Society. 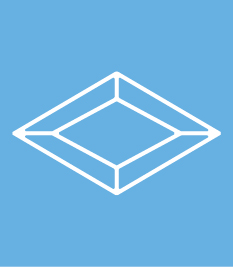 The four points of our diamond symbolize strengthening character and personality, watching attitudes toward fellow beings, recognizing the value of high educational standards, and developing faith and loyalty.

Azure blue and white are the official colors of Alpha Delta Pi. Blue is symbolic of friendship, the basic spirit upon which Alpha Delta Pi is founded. White symbolizes sincerity and truth. 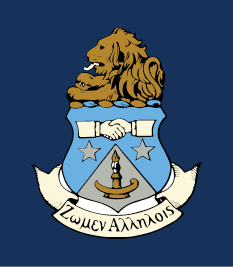 Elizabeth Moseley Coles, who was elected national president at the first Grand Convention, was responsible for having the coat of arms designed. Another sister of Alpha chapter, Agnes Chapman, is given credit for the actual design. Symbolism from our ritual and our Alpha pin were combined in the coat of arms, and design originally had a background of violets. In 1919, the convention body voted to make changes and the present design was accepted. 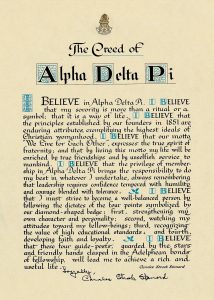 When Caralee Strock Stanard retired as Grand President in June 1948, she expressed her faith in Alpha Delta Pi and its principles in her keynote address at the Convention at Essex and Sussex in New Jersey. What followed was the basis of our Creed. At the close of convention, the outgoing and incoming Grand Council members met and asked Mrs. Stanard to draft part of her address into a Creed. She revised the words slightly, and the Alpha Delta Pi Creed was born.

Throughout her life, Mrs. Stanard lived the Creed she gave us. She served in a variety of Alpha Delta Pi positions from 1936 to 1980. In her life outside of Alpha Delta Pi, Mrs. Stanard was a respected journalist. She taught journalism at Webster College and served as public relations director. Mrs. Stanard was respected for her brilliant mind and leadership skills, and loved for her wit and humor. She was always willing to take time at conventions to autograph copies of the Creed for her admirers. In penning the Creed, Mrs. Stanard gave us words to live by. Our gift to her, to ourselves, and our sorority is to take her words and truly make them a way of life.