Conventions of Years Past…

1906
MACON, GA
Home of Mrs. E.J. Willingham
The first National Convention was held in December 1906 in Macon, Georgia. Until the first convention, the sorority was governed by the Alpha Chapter. At the first Convention, the Supreme Executive Council was elected. Elizabeth Moseley, who was president of Alpha Chapter, was elected National President.

The first convention’s meetings were held in the very large home of Mrs. E.J. Willingham, 233 College Street, Macon GA. The home is still standing and served as rental apartments for several years. The property is currently listed as a single-family home of 10,809 square feet, with twelve bedrooms and eight baths. The first convention was described in the first issue of the Adelphean published in March 1907 which notes that Adelphean Society founder Mary Evans Glass read scripture and lead the opening prayer for the event. 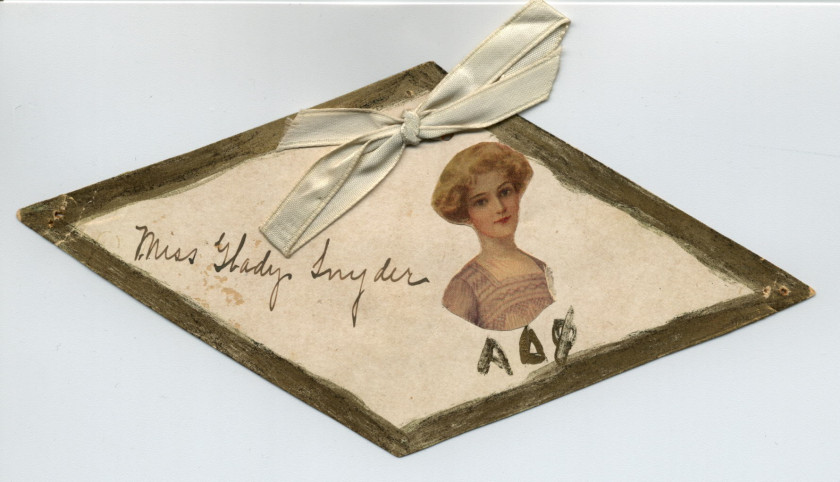 1907
NEW ORLEANS, LA
St Charles Hotel
The second National Convention was held in New Orleans in December 1907. The President of the Supreme Executive Council, Elizabeth Moseley, did not attend the convention which opened on December 27th as her wedding to William Cruse Coles was held the evening before on December 26th. In the absence of a President, Newel Mason, Alpha chapter was elected President and then resigned from the position a few months later. Wildie Hibbler, Eta chapter, was elected Treasurer. A fun fact about Wildie Hibbler…she was Katie Couric’s paternal grandmother! The business meetings were held at the home of Mrs. L.P. Rice on St. Charles Avenue.

1909
GEORGETOWN, TX
Southwestern University
At this convention, it was decided to hold the next National Convention in Atlanta as there were at that time more than 500 members of the organization living in Georgia. 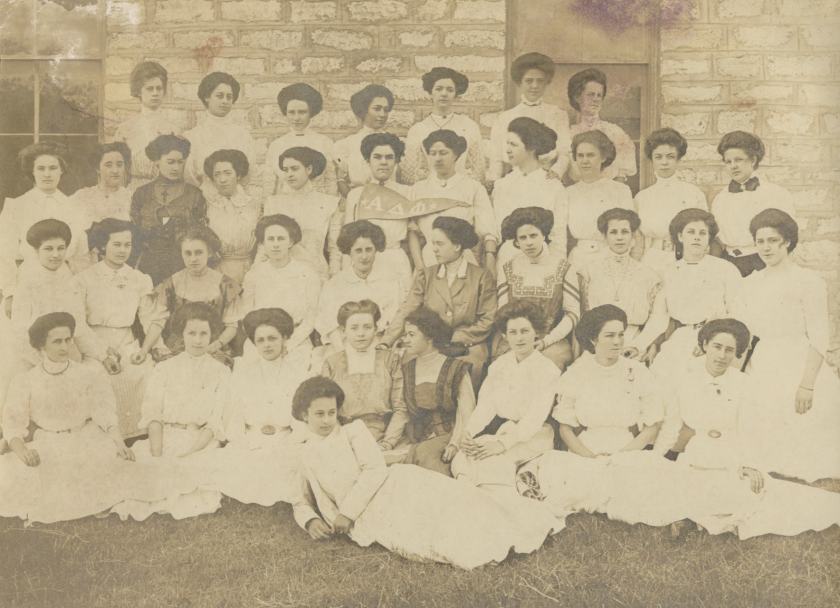 1911
ATLANTA, GA
Piedmont Hotel
Most chapters sent two attendees and seven Alumnae Associations were represented at the fourth National Convention. With additional alumnae, there were one hundred registered members. Most of the convention attendees stayed in the homes of Atlanta’s alumnae members. Meetings were held at the Piedmont Hotel, there was an afternoon tea at the Piedmont Driving Club, and a banquet at the Capital City Club. The Phi Mu Convention immediately followed the Alpha Delta Phi Convention in Atlanta. 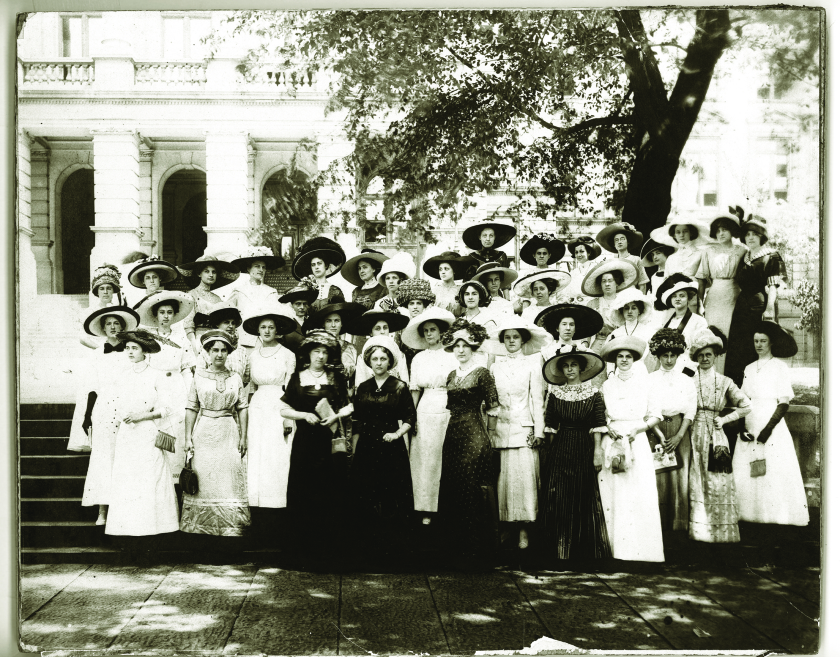 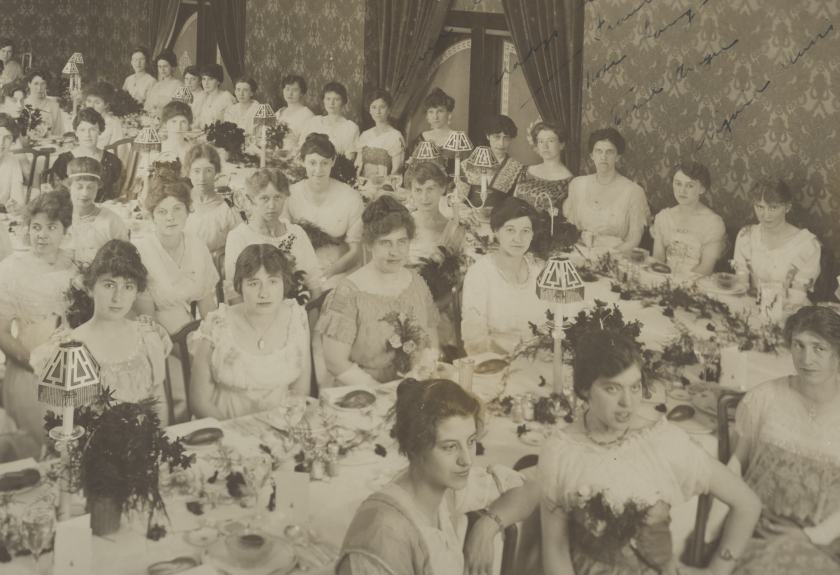 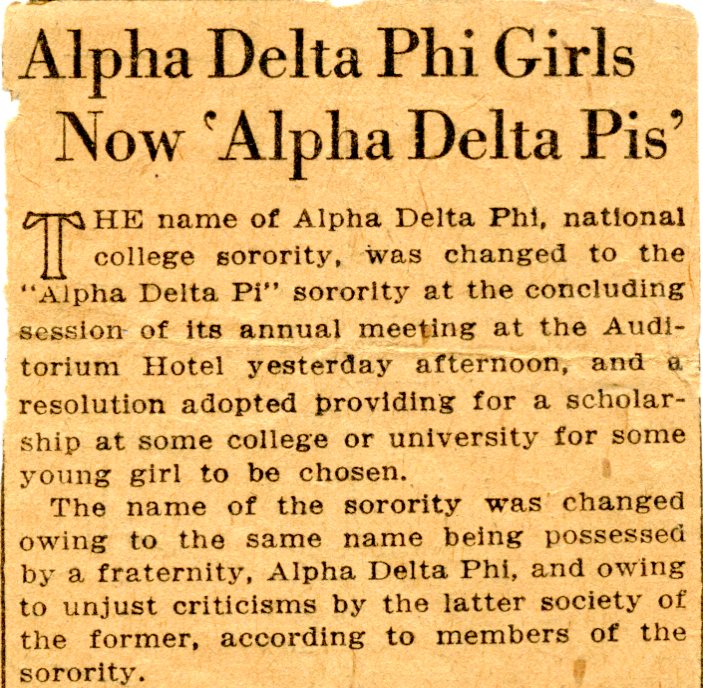 1915
BERKELEY, CA
Hotel Oakland
This National Convention was scheduled to coincide with the Pan American Exhibition (San Francisco World’s Fair). All NPC groups held their meetings back to back, all staying at the sorority houses at Berkeley and meeting at the Twentieth Century Club in Berkeley. 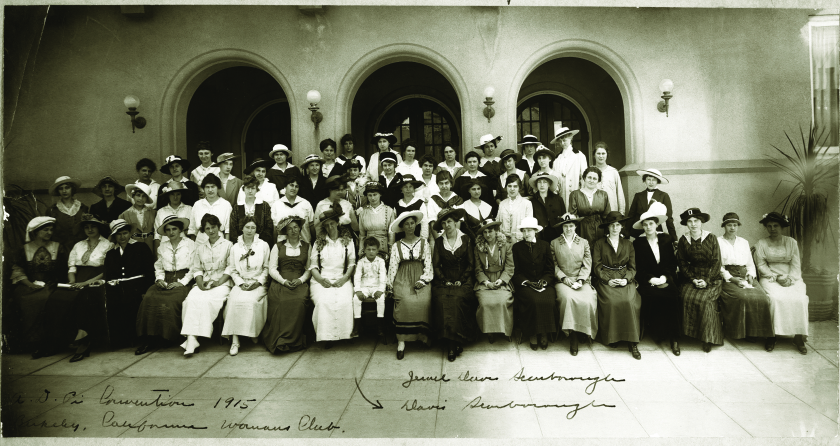 1917
WAUPACA LAKES, WI
Grand View Hotel
At this Convention, Irene Patchett Smith, Psi, was elected National President. She was the first President of the National Council not from Alpha Chapter.

1919
NATURAL BRIDGE, VA
Natural Bridge Hotel
This National Convention was held in the heart of the Blue Ridge Mountains at quite the historic destination! Fun fact…Natural Bridge Hotel was once owned by Thomas Jefferson. It was included in the 157 acres Jefferson purchased in 1774 from King George III. The Natural Bridge Hotel has been offering rooms for rent since 1828. The original hotel was destroyed by fire in 1963 and rebuilt in 1964.

1921
ESTES PARK, CO
The Hotel Stanley
This year’s convention attendees took the train to Denver and then rode in the touring cars provided by the Rocky Mountain Park Touring Company to their destination, the Hotel Stanley. It was suggested that those attending convention include in their attire, a pair of shoes or boots suitable for hiking, a heavy wrap, a costume for the carnival dance, and an evening dress for the banquet!

1925
MT. RAINIER NATIONAL PARK, WA
Paradise Inn
At the 1925 Convention, Mary Kelly Shearer, Pi, who had been the Adelphean Business Manager, was elected Secretary-Treasurer. She established the sorority headquarters in her home. Membership records and finances of the sorority were entrusted to her care.

1927
ABOARD S.S. CAPE TRINITY
St. Lawrence River
The convention of 1927 was held aboard a steamship that leisurely cruised the St. Lawrence Seaway from Niagara Falls to Quebec City and back. Sounds like quite the convention adventure! 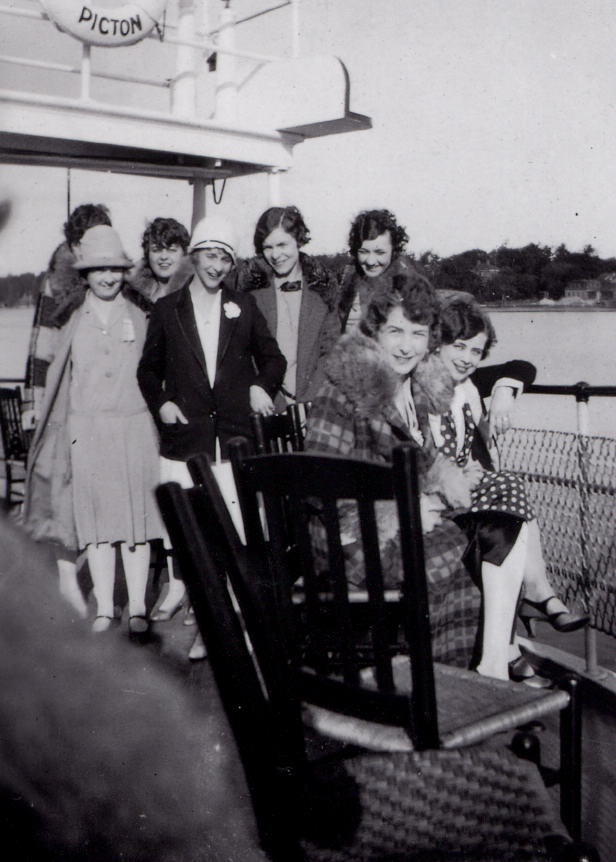 The next few Conventions were…

You may be wondering why convention was held on a few even years during this period. During the Depression and then again during World War II, ADPi skipped a few conventions and then returned to holding conventions in odd-numbered years with the celebration of our centennial in 1951. 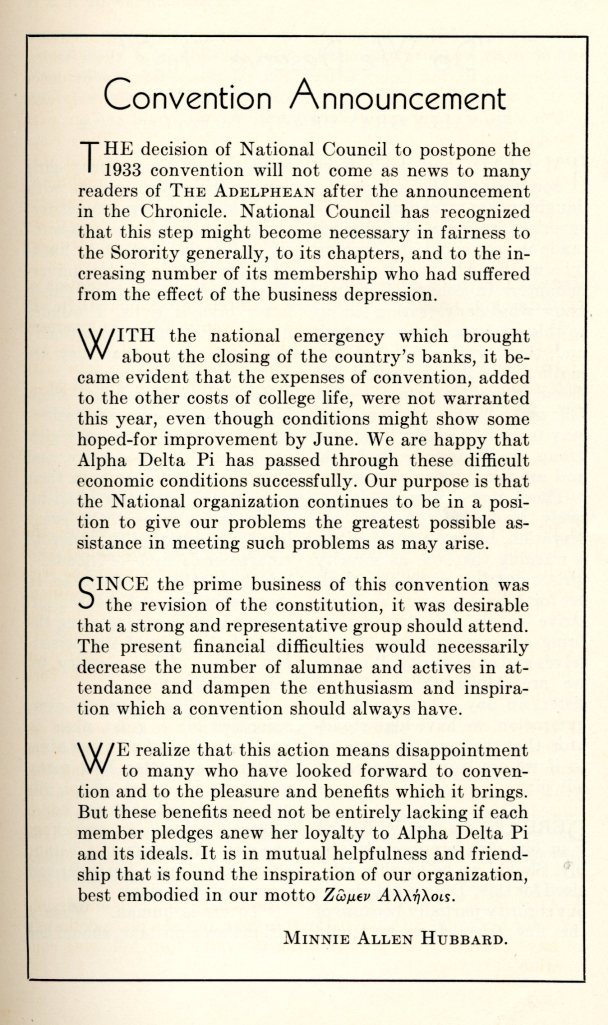 1941
HOT SPRINGS, VA
The Homestead
The white dress processional began at this convention! 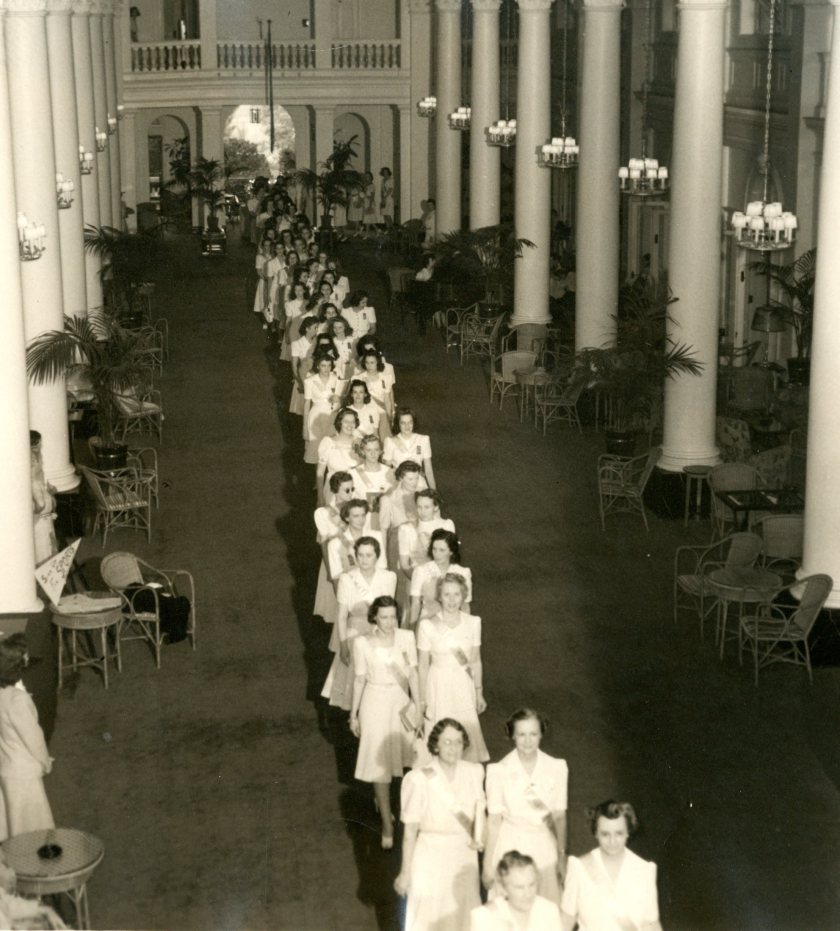 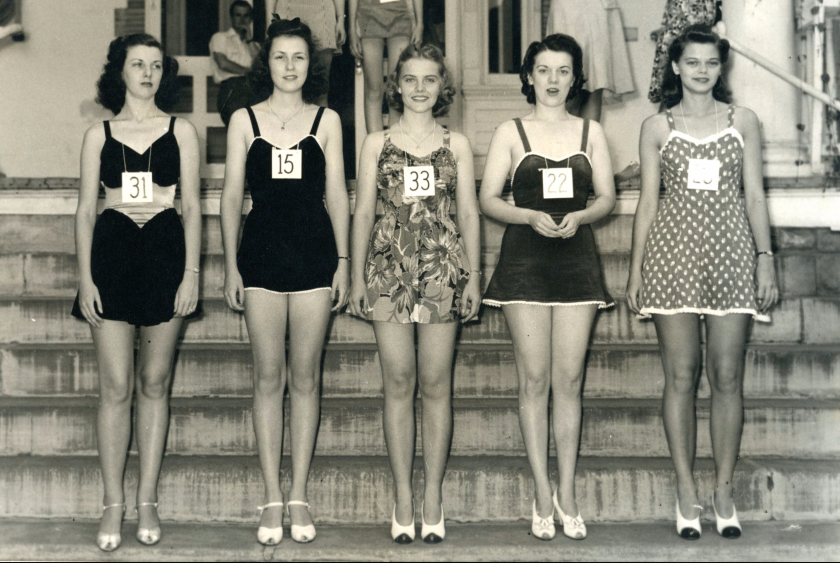 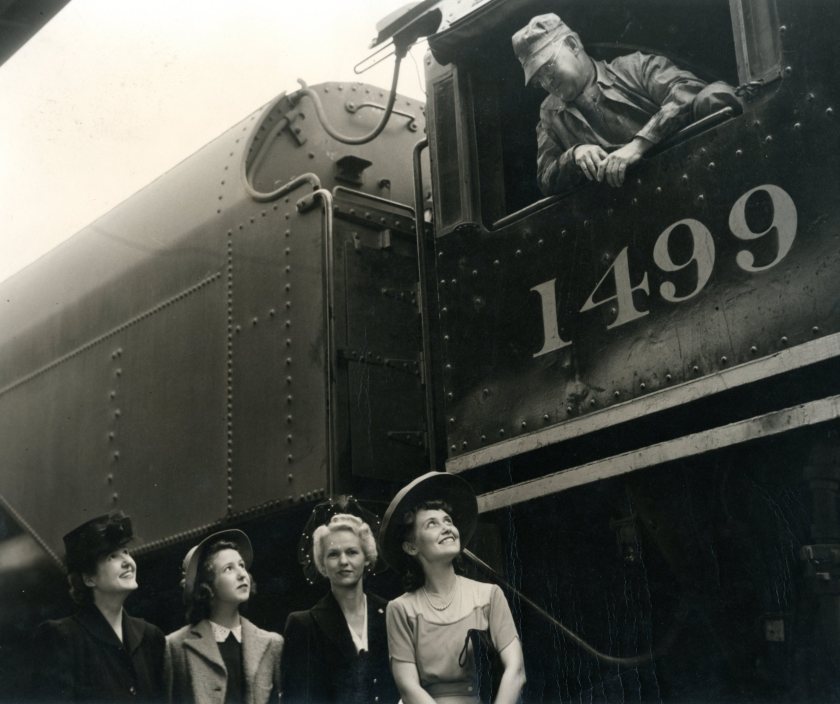 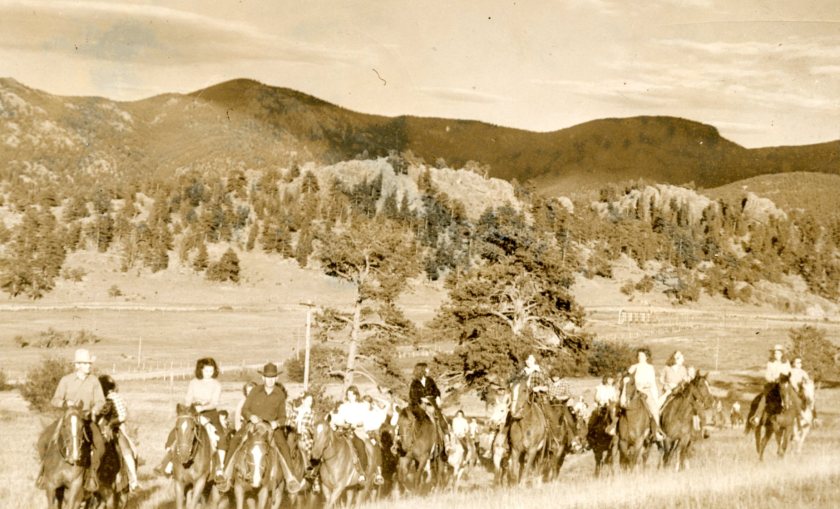 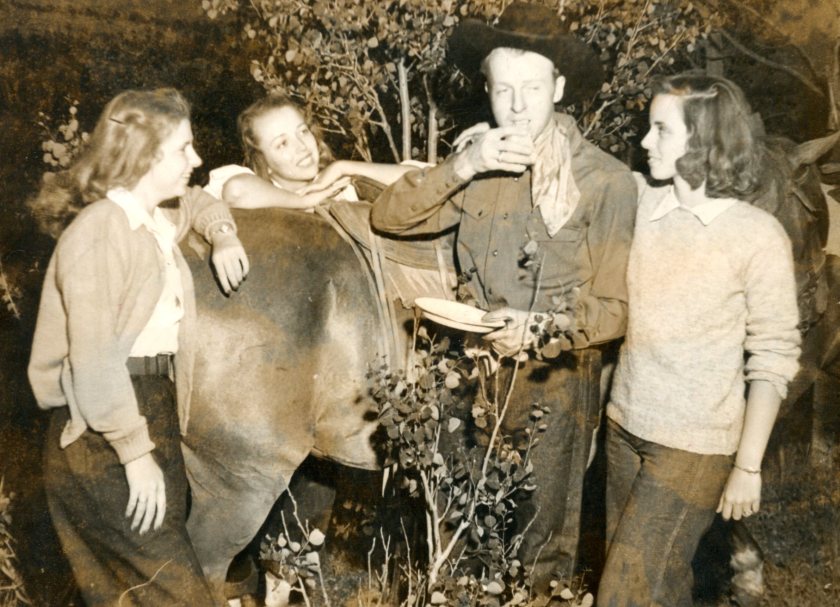 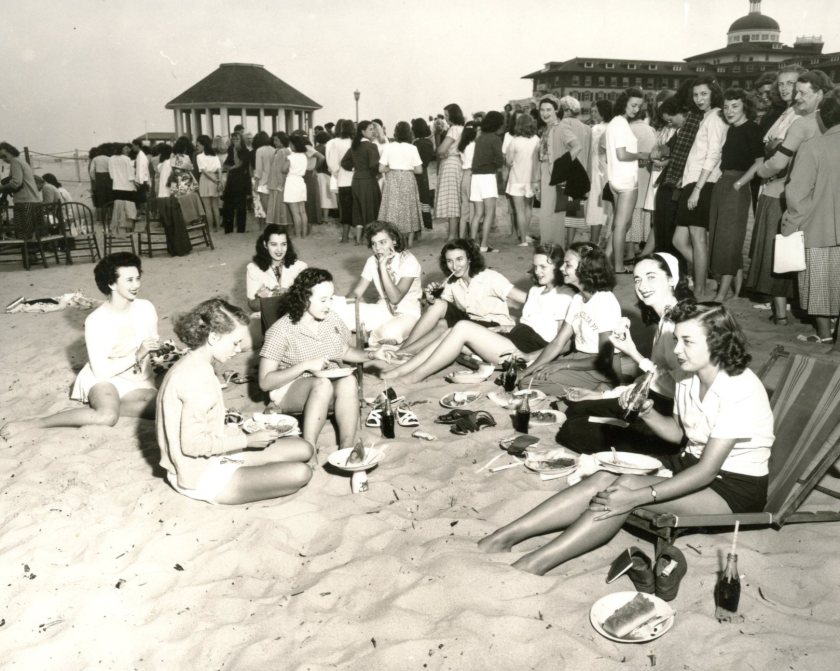 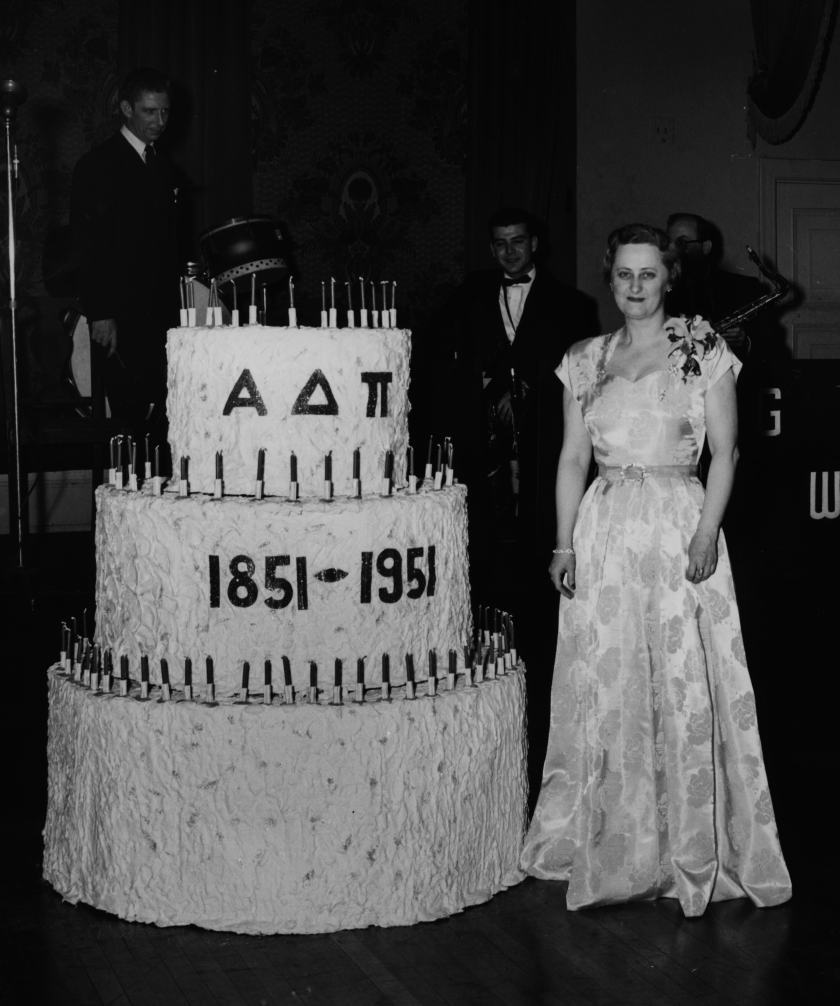 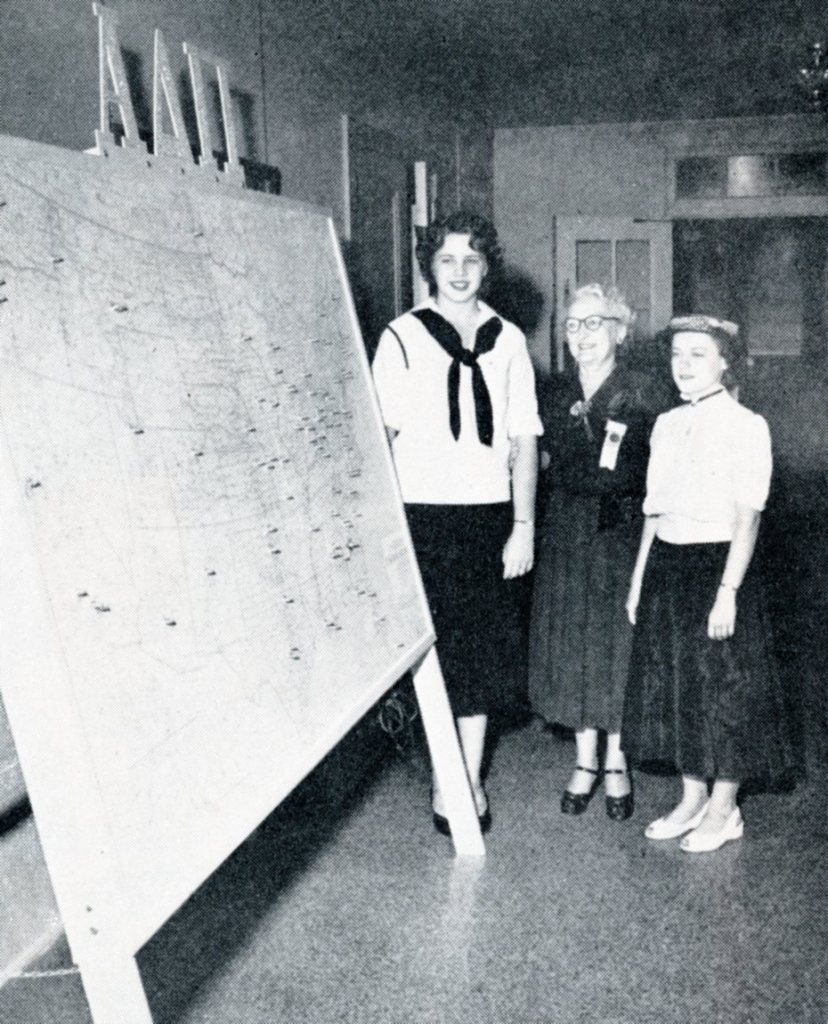 1957
NASSAU, GRAND BAHAMA ISLANDS
Emerald Beach Hotel
A memorable event from this Convention was an Old Timers’ Dinner which included a fashion show of period dresses. 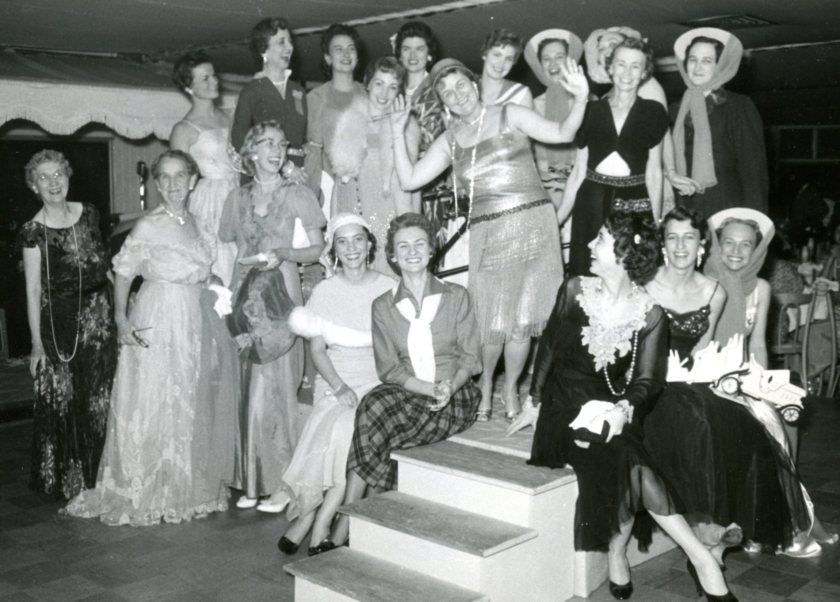 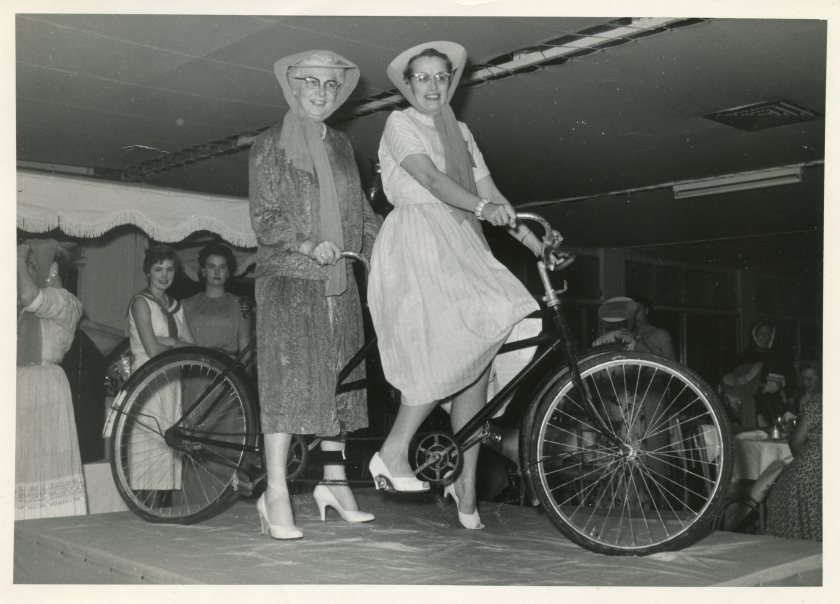 1959
QUEBEC CITY, QUEBEC, CANADA
Chateau Frontenac
Grand Council was meeting at the Seignory Club Hotel in advance of the Convention. These early attendees saw Queen Elizabeth and Prince Phillip at the hotel. The Queen and Prince were visiting Quebec for the formal opening of the St. Lawrence Seaway. Floral arrangements and table decorations from the Royal Banquet were given to Alpha Delta Pi and used at the Grand Convention Opening Banquet.

Written on back of a photo from Maxine Blake, “Queen Elizabeth and Prince Phillip at Chateau Frontenac for official government banquet. Dress pale yellow embroidered with diamonds. Crown and jewels all diamonds. Fur ermine. Alpha Delta Pi Council at left and beyond Phillip. I could have reached out and touched Queen Elizabeth we were so close to her.” 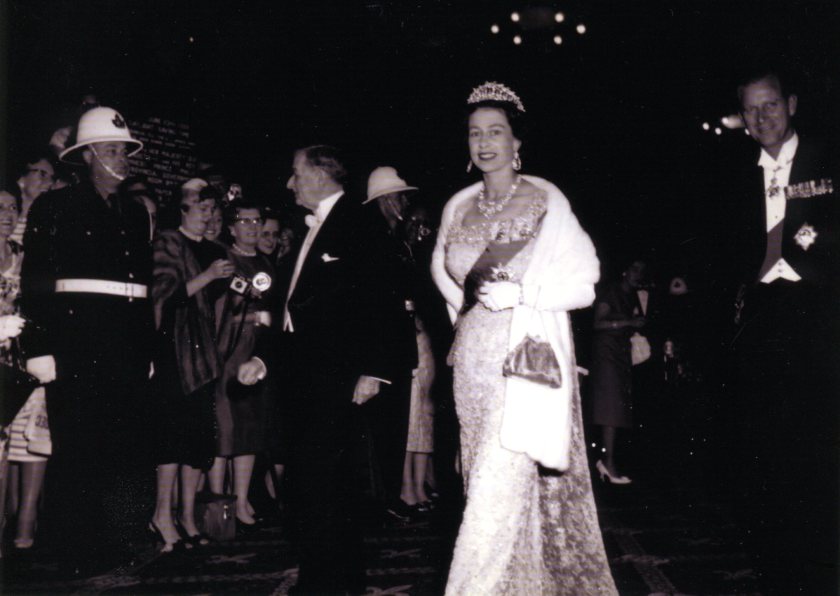 View the timeline and photos below of Conventions from 1961 through 2015! A fun fact regarding ADPi’s Sesquicentennial Convention in 2001 held in Atlanta at The Marriott Marquis….an updated Alpha Delta Pi logo was introduced. Again, in 2015 at the Fairmont Scottsdale Princess, a rebrand was introduced including the launch of our Adelphean Font. 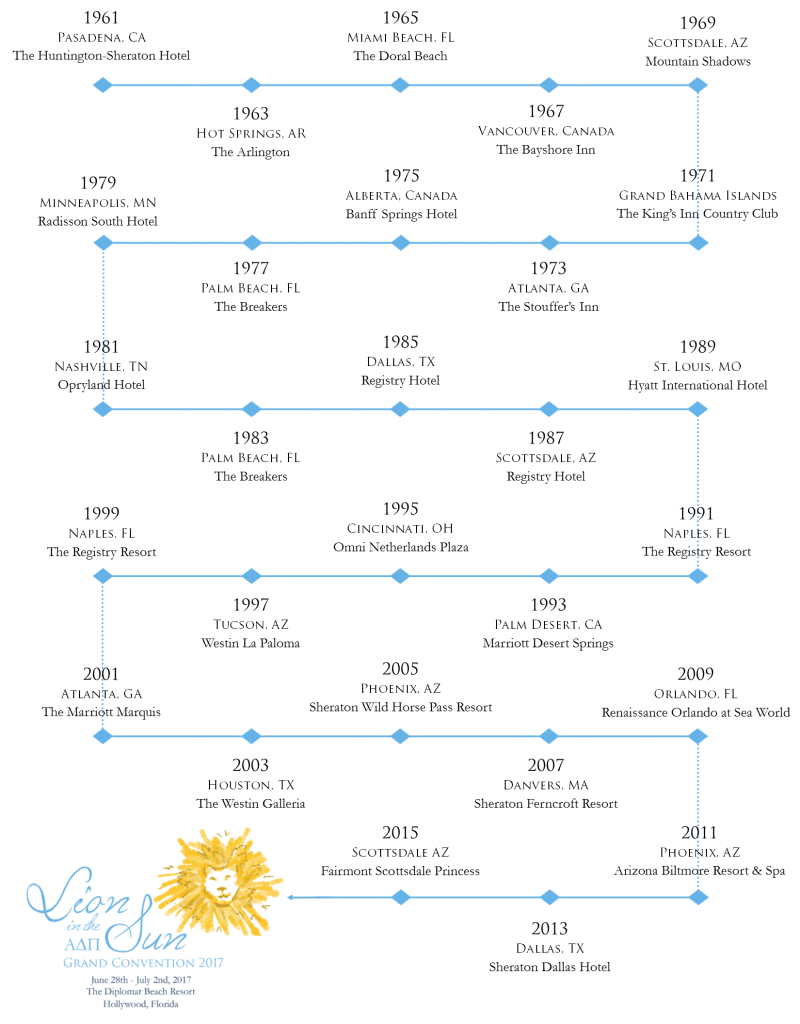