Countdown to Grand Convention: What Is It?

Grand Convention is the governing body of the sorority where business meetings and grand council elections are held. Prior to the first National Convention in 1906, the sorority was governed by Alpha chapter. In December of 1906, the first Convention was held at the home of alumna Eula Lowe Felton Willingham in Macon, Georgia. The entire Alpha chapter was present, along with delegates from Beta, Gamma, Delta, and Epsilon chapters and alumnae from Atlanta, Waynesboro, Quitman (all in Georgia), Chattanooga, and Birmingham. Macon alumnae served as hostesses for the Convention. The first Supreme Executive Council was elected with all members hailing from Alpha chapter. In addition to a governing council, The Adelphean also came out of the first National Convention. The site of this convention is still standing in Macon, Georgia. Now known as Hubble House, the home has been converted into apartments. 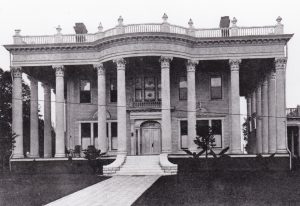 1915 – The lion was named the official mascot of Alpha Delta Pi. 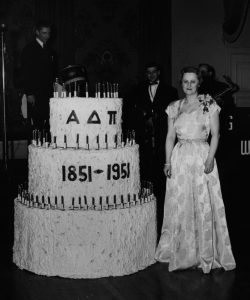 1917 – Irene Patchett Smith was elected National President. She was the first President that was not from Alpha chapter; she initiated at Psi chapter at the University of California, Berkeley.

1925 – Mary Kelly Shearer, Pi-Iowa State, was elected Secretary-Treasurer. She was tasked with centralizing the business of the sorority and established the first headquarters out of her home in Ames, Iowa.

1927 – Convention was held aboard a steamship that cruised the St. Lawrence River from Niagara Falls to Quebec City and back. This was the first convention of its kind held by a sorority.

1951 – The Centennial Convention was held at Wesleyan College in Macon, Georgia.

2001 – The 150th Anniversary Convention was held in Atlanta, Georgia, and included a pilgrimage to Macon for the unveiling of the gates given to Wesleyan College in conjunction with Phi Mu. A new brand was also announced. 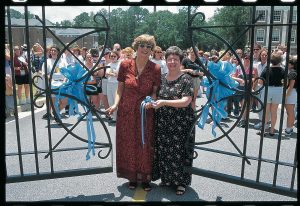 Traditions and Their Beginnings

One of the most recognizable images from Convention is that of the Adelphean Processional – sisters dressed in white with blue ribands bearing our motto. This began at the 1941 Convention in Hot Springs, Virginia, to recreate the original parade of Adelpheans through the halls of Wesleyan in white dresses with blue and white ribands announcing the founding of the Adelphean Society. The Adelphean Processional has remained a part of the formal opening of Convention. The parade of chapter flags was added in 2001 for the 150th Anniversary. 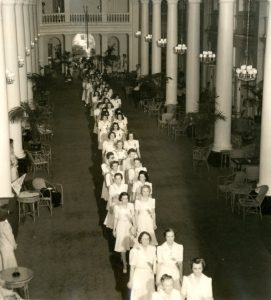 At the first convention in Canada in 1931, a toast was made to the King of England and to the President of the United States. In 1938 in Quebec, Canada, “God Save the King” and “America the Beautiful” were sung. This began the practice of singing the national anthems of the international sorority. We now sing “The Star-Spangled Banner” and “O Canada” at the opening session.

Model initiations have been a part of Convention since 1907. The memorial service was created in 1917 and has been in every convention program since that time. The “Old Timers” dinner began in 1931 to honor those who had attended previous conventions, and the singing of the “Convention Song” remains one of the most jovial parts of alumnae night.

Another major part of Convention is the final night banquet. This began in 1909 with a meal, toasts, and individual tributes. In 1921, this became a formal event including awards presentations. It was named the “Feast of the Diamond” in 1938 and is now known as the Diamond Awards Banquet. Silver toasting cups engraved with chapter names and installation dates were first used in 1965. At the end of the Diamond 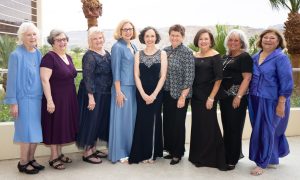 Past Presidents at the 2019 Alpha Delta Pi Grand Convention in Las Vegas, Nevada

Awards Banquet, a candle-light roll call and closing recessional takes place, followed by the singing of Alpha Delta Pi songs. This tradition began in 1951 at the Centennial Convention.

Stay tuned for more information about this year’s Grand Convention and registration coming in the next few months!