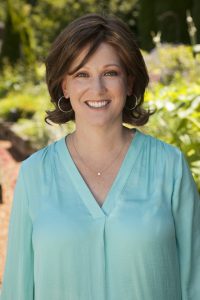 Nicole Opas joined the Alpha Chi Chapter of Alpha Delta Pi at the University of California, Los Angeles in 1993. While she was initially released from Alpha Delta Pi after the first round of formal recruitment that year, Nicole still had the best connection with Alpha Delta Pi and decided to withdraw herself from recruitment before bid day. Soon after this, she got a call from Alpha Chi’s Chapter President who invited Nicole to the house for Monday night dinner and Nicole never left. Because of her unique recruitment experience, Nicole felt there was mutual connection and choice between herself and the chapter, so she decided early on she would fully commit herself to Alpha Delta Pi and poured a lot into her collegiate experience, sharing the following about her time at the Alpha Chi Chapter:

“First and foremost, I had a lot of fun and met great people. But I was also afforded leadership opportunities that as I reflect on them, I realize I learned a lot earlier than my peers how to plan a big event, deal with conflict, and create a culture within an organization. These are things I carry on in my professional life today, and because I invested in ADPi, I got a lot out of that collegiate experience.”

Because of her time as a collegian, Nicole would be led to give back to Alpha Delta Pi in multiple ways. After graduating from UCLA in 1997, she traveled as a Leadership Consultant for a year. She then returned to California where she began her career in technology, specifically in mobile gaming. Now, Nicole is the Senior Vice President and Head of Studios for Big Fish Games. Her service to Alpha Delta Pi has continued though as she has remained an active volunteer, currently serving as the Western District Team Director.

In 2003 after a chapter visit with fellow volunteers and Grand Council, Nicole was inspired to make her first gift to the Alpha Delta Pi Foundation. As a young alumna, Nicole did not fully understand the difference between gifts to the Foundation and the dues she paid as a collegiate member. A volunteer Nicole respected help explain the difference, told her more about the Foundation, and shared why they chose to give, which would in turn led Nicole to give to the Foundation.

Nicole continues to give to the Foundation because she has been impressed with the Foundation’s growth and ability to reach members in multiple ways:

“From the emergency grants, which are obviously very special, to the educational programs that we’ve had, I have a front row seat to what difference we’re making by putting Foundation gifts to good use. I directly can see how it touches people’s lives within the organization.”

For the most part, Nicole gives to the Foundation by stock gifts. This giving method was recommended to Nicole by her financial planner as a way to give generously with additional tax positive results. After learning more about stock gifts, Nicole has given this way every year.

This process is relatively seamless for Nicole, explaining that its almost easier than putting in her credit card number or writing a check. Once she decides to make a gift, her financial planner transfers the stock to the Alpha Delta Pi Foundation, and Nicole receives the income tax deduction for her gift, avoids the capital gains tax on the transfer, and furthers her impact as a Foundation donor.

The shares Nicole gives are mostly from her company and explains that giving this way affects the way she thinks about her day-to-day work, too:

Most importantly, Nicole views her gifts by stock as the best way to maximize her contributions to the Foundation and encourages everyone to investigate this giving method and see if it is a good fit. For more information about making a gift of stock to the Alpha Delta Pi Foundation, please contact foundation@alphadeltapi.com.