The Ronald McDonald House of Memphis opened in 1991 and has housed more than 10,000 children in its almost thirty years of operation. The house is a little different among Ronald McDonald House Charities (RMHC) locations. Most of us know RMHC as providing a home-away-from-home for families, so that they can stay nearby while their children are hospitalized. RMHC of Memphis not only provides this service for families, but also for the children with pediatric cancer and other catastrophic illnesses undergoing treatment at St. Jude Children’s Research Hospital.

RMHC of Memphis provides a family-centered community that serves as a residential facility for both patients and their families, so when their child is done at the hospital – with appointments, chemo, physical therapy, etc. – the whole family can stay together and have a nurturing home-away-from-home. The average length of stay is 55 days.

Our Alpha Delta Pi sisters were instrumental in establishing the RMHC of Memphis. Susan Ballenberger Hibler, Gamma Rho—Arizona State, was part of that effort. She shares her story here.

An Early Dedication to RMHC

When my husband and I moved to the Bay area from Scottsdale in 1980, we knew no one. I contacted the Alpha Delta Pi alumnae association there to connect with people. I volunteered to help organize the group to help out at the Ronald McDonald House at Stanford. They were in need of relief managers for the weekend, so we scheduled alumnae to stay at the house two weekends each month. My kids and I stayed at the house about four of these weekends before we moved to Memphis.

My husband and most of his friends were avid golfers, and I was able to rally them to help start a golf tournament to begin raising funds for the eventual house. Donna Winfield Skaarer, Gamma Eta—Memphis, was instrumental in our efforts (and her husband was a golfer too).

The local McDonalds franchise owners and their suppliers were on board. We had great local support. We were able to get McDonald’s, The Coca-Cola Company, the Scott Paper Company, and Budget Rent a Car to help sponsor the golf tournament. The first tournament was in 1987 at TPC Southwind, where the PGA invitational to benefit St. Jude is now held.

In 1989, the Board purchased the current 2.7-acre site of Ronald McDonald House of Memphis using funds raised through the golf tournament. It was a massive project, and I went Sustainer in the Junior League of Memphis to help take it on. 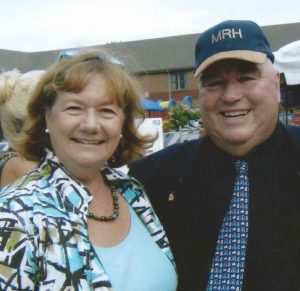 One great memory I have was from the groundbreaking. Who could expect that I was out of town when the event was held? I was, however, at the RMHC Convention in Chicago as a representative. I was on the phone with Donna Winfield Skaarer when the first actual batch of dirt was being shoveled. I called Jim Murray (co-founder of the first RMHC in 1974) over to the phone as it was happening. He remembered this moment many years later when we were both back for the 25th anniversary of the RMHC of Memphis.

Getting Down to Business

At that point, it became my responsibility to establish the operational plans for the house. I set up the policies and procedures, the volunteer program, and hired the staff. The woman who became our House Manager was amazing. She and I chose the furniture, the supplies, and all the household needs. It was a true privilege to be the one to open the door for the first families to arrive to stay at the house! The families entered and were greeted by all the volunteers who were there.

Jill Horn, Gamma Eta—Memphis, was busy with her duties as Miss Tennessee, but she was there to sing at the first gathering. We were also honored that Emily Lusby Mackebee, Alpha Kappa—Tennessee, Knoxville, attended. She was serving as Service Chair for Alpha Delta Pi. We did quite a bit a training of volunteers prior to opening the house. Emily helped with that training on several occasions. ADPi collegians and alumnae were key. Because we started with minimal staff, the volunteers served in all capacities. We served meals, played with the children, answered the phones, and helped in all ways.

I’ve been fortunate to have experienced many incredible memories with ADPi. The building of the Ronald McDonald House in Memphis will remain as one of the greatest experiences of my life.