While listening to a speaker, a teacher, an actor in a movie, I think we could all I agree that at some point, a simple line was spoken that resonated with your ears, your heart, and your being. I mean let’s be real, my senior quote was literally from Grey’s Anatomy and half my walls in Room 7 of our chapter house are covered with other miscellaneous quotes, phrases, and scriptures that have impacted my soul somewhere along my journey of life. I know we all occasionally hear a phrase and think, “Wow. That’s good.” This weekend at the 2018 Alpha Delta Pi Leadership Seminar, I felt many of those moments as wisdom came directly from the voices of my sisters and friends of ADPi. I’m here to share those “wow” quotes from sisters and friends of ADPi and express the true impact they will have in our chapters and on our campuses moving forward.

“These letters don’t make me better than you, they make me a better version of the woman I used to be.”

Panhellenic spirit is something we all struggle with from time to time – I know I certainly do. I get caught up in being the “first and finest.” Being the first and finest means that we’re a part of the very first secret society for women, a place we could call our own back in a time where there wasn’t much else we could claim. Girl power, am I right ladies? Eugenia and our other five founding members created something that has expanded into so much bigger than they could have ever imagined: a community of secret societies that bring good change into collegiate campuses and communities beyond a chapter room. I am grateful to have best friends outside of Alpha Delta Pi because I can see that beautiful growth and change that their organization has catalyzed in them just the same as ADPi has done within me. Wearing Alpha Delta Pi proudly across my chest does mean that I’m a member of the first and finest, but it doesn’t mean I’m better than anyone else wearing a different set of letters. It simply means the founding of my sorority eventually helped foster change in their lives just like mine.

“We will make a committee!”

I wish I could give proper citation to all of the quotes, but unfortunately this is the only one that I wrote down the original orator. Dr. Lori Hart is the most hilarious, fantastic woman I’ve ever heard speak, and she couldn’t have been more right than she was during dinner Friday night. (She is not a sister in ADPi, so my title is only slightly deceiving, but she is a Panhellenic and AOPi sister and a “Friend of ADPi”.) She works with fraternities and sororities on a regular basis. I would call her a professional “Greek fixer.” Dr. Hart described to us how most all sorority women think and approach any issue we have within our organization. We form a committee of volunteers or assign a few select lucky group of women to fix said problem. We continuously go around and around trying to find an ultimately ineffective solution to this problem that doesn’t actually exist. We think the problem is motivation or sisterhood or leadership when in fact, it is often something much deeper than that. Lack of motivation isn’t an issue you can have, it is the result of a more profound problem. A troubling sisterhood is a byproduct of something worse going on deeper within a chapter. We circumvent “the problem” and psychoanalyze “the problem” and go all committee on “the problem” until we are azure blue in the face three months down the road yelling at chapter, “HOW are we still having this problem sisters?!?!” Find the root. Find the cause. And go from there. And please, no more committees.

“Bridging is where the growth happens.”

Bonding refers to social networks that are limited to people who are similar. Bridging refers to social networks among more diverse people and interests. The ballroom of about 250+ collegiate ADPi members on the lobby floor of an airport hotel on the outskirts of Dallas came to an almost complete consensus that bridging two groups of people or communities MUST be more difficult than bonding them together. But after a sister spoke these wise words written above, we also came to a general consensus that her statement also must be true. Where there is strife, there will eventually be success. Two things that seemingly don’t go together or don’t have anything in common can often make the best duos and develop the biggest changes in a community and the world. Not going to lie to you, I couldn’t think of a good physical example to help this quote make more sense and for that I apologize. BUT, when it comes down to it, find two groups of people where the only common denominator is you and try and bridge the gap between the two. Discover how one could help the other, and vice versa, and watch light bulbs go off.

“We learn from each other.” 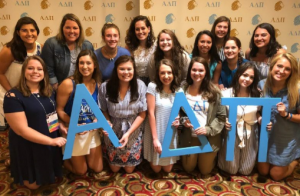 While our open motto “We Live For Each Other” holds so much substance and dearness to my heart, I almost love this alternative WLFEO phrase *whispers so that Eugenia can’t hear me* equally. Think about it for just one minute. Yes, as a sister of Alpha Delta Pi, I live for my fellow sisters. I live alongside and for my roommate, Morgan. I live for one of my very best friends, Emma. I live for these many many sisters that I have met over the course of my time in Dallas. But as much as I live for them, I learn from them too. I’ve learned how to live better, laugh more often, and appreciate the little things. I’ve learned that my sisters bring out the best in me. I’ve learned about difficult problems and excelling solutions in a number of chapters other than my own. I’m so excited to go back and implement what I’ve learned here from facilitators and collegiate sisters and wise alumnae that I almost can’t wait until August and may just force my chapter to come back to school tomorrow (JK, I do not have the power to do that, but  would really consider it if I had said powers). If we aren’t learning from each other and growing alongside one another, then we aren’t getting the most out of our sorority and we most certainly aren’t becoming better women. Live for each other, learn from each other and be better because of both of those WLFEO acronyms.

When a sister speaks up, I urge you to listen. It might make you think differently about the world. It might even end up being painted on a canvas and hung on your wall because, c’mon, your sisters are just as wise as Meredith Grey.